Hospice opens up gardens thanks to Berkeley

Greenwich & Bexley Community Hospice thanked Berkeley East Thames last week as they officially opened their new garden paths and celebrated being able to invite people back down into the hospice grounds.

After extending the hospice building in 2014, access to the tranquil grounds became limited. The hospice had been raising funds for a renovation ‘paths project’ when last year, Berkeley East Thames pledged its support to the hospice, covering full costs to restore and improve access to the garden for patients, families and visitors, via a series of landscaped zig-zagging paths.

The work to transform the garden began in September and continued throughout the autumn, with the final touches being completed in early spring. The result is a completely overhauled peaceful space with secluded seating areas, fully accessible and wheelchair friendly.

The hospice now plans to use the money already fundraised for the ‘paths project’ to further improve the garden access for all.

Recently (July 22), hospice staff welcomed Berkeley East Thames back to celebrate the completion of this project and to officially open the zig-zagging paths, opening up the gardens once again to patients, families and staff. The Mayor of Royal Borough of Greenwich, Cllr Leo Fletcher, who is supporting the hospice throughout his mayoral year, and Deputy Mayor of Bexley, Cllr Rags Sandhu, both attended to celebrate with staff and hear about the challenges they face and how they are working differently to meet demand.

Kate Heaps, Hospice Chief Executive said, “We want to extend a huge and heartfelt thank you to Berkeley East Thames. It has been so long since patients, families and staff have had full access to the peaceful setting here and I am delighted to see people back outside again.

“Being outdoors, enjoying the fresh air and sunshine is really important for people’s healing – which may seem an odd thing to talk about when we’re caring for people who may be nearing the end of their lives, but that’s what hospice care is about. Our care is about keeping people comfortable and really living, making the most of time together with loved ones. Our patients and families tell us what a difference it makes, being able to relax in the garden so we’re delighted to be able to welcome them back out here.”

Cristyn Sharkey, Community Engagement Coordinator at Berkeley East Thames, said: “Through our developments, we’re well aware of the importance of accessible and tranquil green areas.  Regular exposure to nature is proven to boost people’s mental wellbeing, and I am really pleased we could support Greenwich and Bexley Community Hospice’s good work in this way.  It was great to see the fully renovated garden and hopefully it can make a real difference to the many people the hospice helps.” 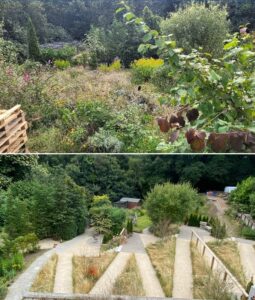